Ok Ive had my coffee now and Im ready!!

After returning from a two week holiday it has been a rude shock getting back into work and the ‘normal’ routine.

Just five days after returning I along with my partner (The Ruth), officiated at a wedding, it was a little over an hours drive, so we decided rather than come home after the practice run we would stay with friends and drink coffee. 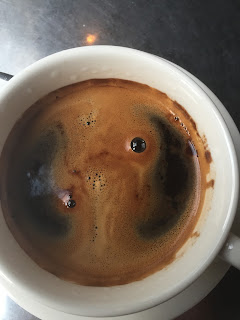 It has been 4years since we last spent time with them, so it was a great time of eating and talking, oh and coffee !!

As we chatted about what events both personally and globally had taken place since we last spoke it wasn’t long until wefound ourselves in familiar territory, as we drank coffee.

Issues of strained or broken relationships, conflicts in work environments along with confronting family matters, all part of the challenges we face and we deal with the stuff of life, as we drank coffee.

It is so good to have people who are able to share the stuff of life, both difficult and joyful with us, more importantly, having been entrusted with this stuff we need to be trustworthy.

As we face the challenges and joys of 2016, may we in the positions of trust and support, honour and respect this trust, so together we share the journey of life, over coffee.