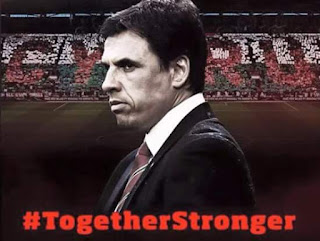 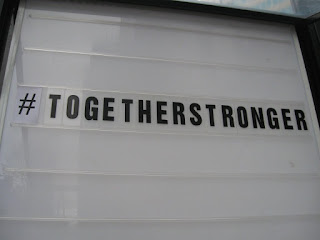 You may think that this week’s sign is a bit strange – and you might be right. If you look on Twitter the hashtag #TogetherStonger is the hashtag for the Welsh Soccer team. As of today they are in the semi finals of the Euro 2016 soccer championship. This is unheard of and (being honest) quite unexpected.

So we at the Melbourne Welsh Church wish to show our support for the Welsh Team as they play Portugal on Thursday morning our time. C’mon Wales!

But thinking about it – #TogetherStronger is a great idea. If we’re honest (and by that I mean Welsh Soccer fans) we don’t have that many world class, top name players. (One of our strikers doesn’t even have a contract for next season yet!) Apart form Gareth Bale we don’t have any world beating superstars. In fact mention the names of the Welsh team to most soccer fans and they’ll know a few of them and have heard of some of them but we don’t have a team of over paid stars like, say, the English soccer team. Most of the English players are household names in football – well known and well paid players who play for big teams and expect success. By comparison the Welsh boys were just pleased to get to the Euros at all – it’s our first major championship for about 50 years.

To get to the semifinals is a huge achievement for Welsh football. It shows that a star team can beat a team of stars and that we are greater than the sum of our parts; that we are #TogetherStronger. To Chris Coleman (the manager) and all the staff and players we can only say well done, keep it up, you’ve made your nation proud!!!!

If I was asked to go and talk to the Welsh team before the game I would give them this advice from
Joshua – it fits the hashtag #TogetherStronger (and it can apply to all of us as we face the various problems in our lives).

Haven’t I commanded you? Strength! Courage! Don’t be timid; don’t get discouraged. GOD, your God, is with you every step you take.”

So Strength, courage, don’t be timid; don’t get discouraged – we are #TogetherStronger be that with teammates on the pitch or with God in life!!

Category : be excellent to each other , Church sign of the week , Doubt , God , Hope