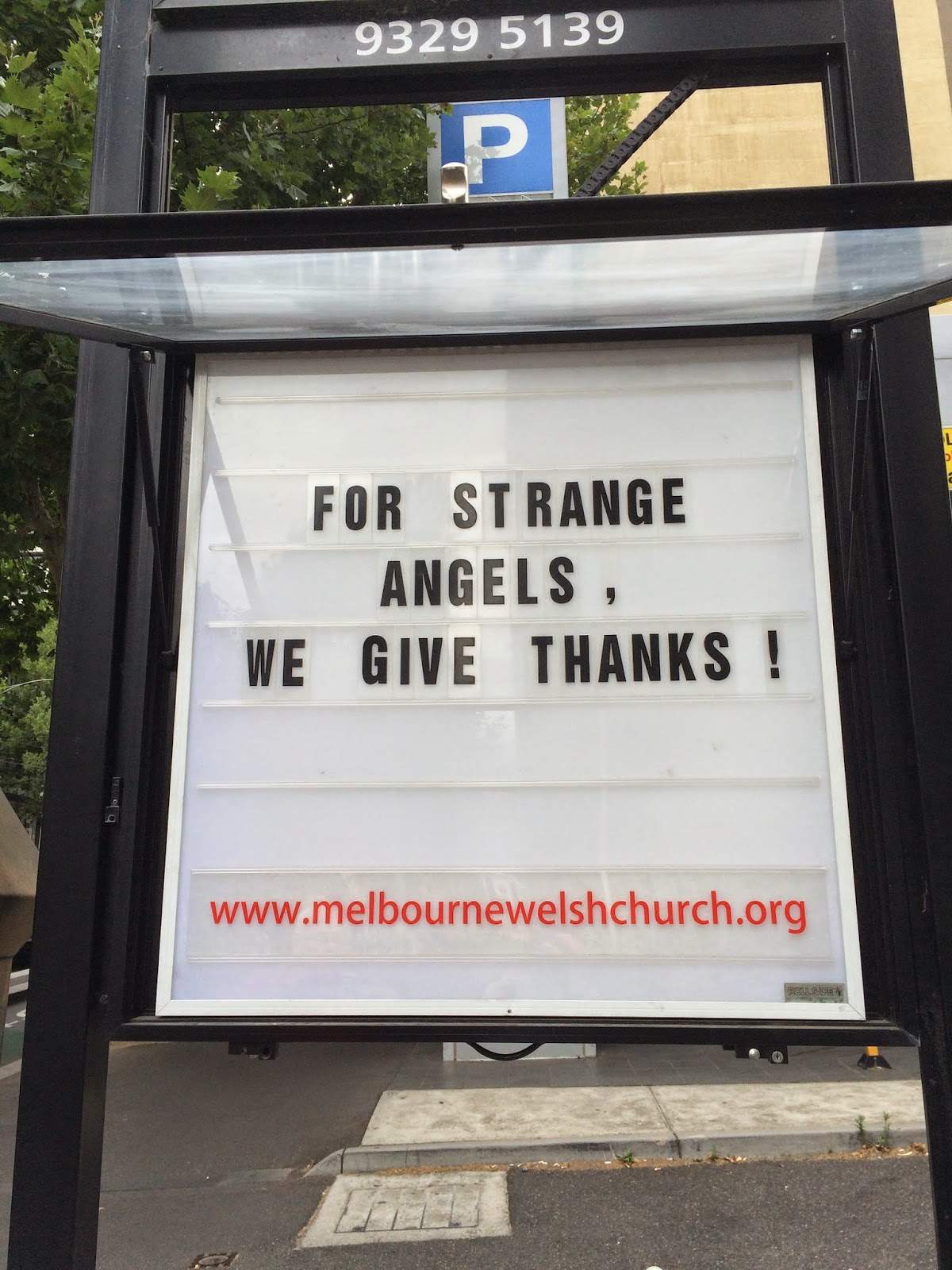 For Strange Angels We Give Thanks

We’ve all met them – those people who when you need a little help just show up. They usually look like the last person you’d expect to be helpful and yet are angels in disguise. They arrive unlooked for and leave just as quickly and yet they are undoubtably messengers from God.

Hairy bikers, tattooed ladies, dirty fishermen, all sorts of everyone – they can be anyone, anywhere.

So today we just give thanks for strange angels.

If you have ever met one leave a comment and tell us where.

Having had sometime away recently to take part in a youth leaders thingy and then my days off, time to see family and with my partner, I am hanging out to get back to the streets  of Melbourne.

I miss those Ive met over the past 12 months, the refreshing world view they share, the fragility they share and the ‘stuff’ we enjoy over food or in conversation has become part of my new normal!!

So its back to ‘loitering with intent’ for me.

On the road, don’t be afraid to detour.

Category : be excellent to each other , Bubba , Community , Family , Hope , Hospitality , Neighbour , Peace , The Trip

On a recent road trip, to speak at a youth leaders event, I made a concious event to visit small communities, off the main highway.

Once these place were unavoidable, now bye passed often ignored in our rush to get places.

More than a trip down memory lane, it was a reminder of what we often miss in the business of life.
Often we remember the experiences which wound us, this trip reminded me of the good stuff, good people and the experiences that shape and mould.
Much like a road trip where we take detours, we need to detour on out life’s journey too.

This reminds us of what we once experienced, but so easily forget.

It reminds us the people whose lives we may have influenced, with out  knowing it.

Go on take a detour, it may just make the journey.

One of my grandsons, Atticus a beautiful boy aged three going on 20, was asked by his mother if he had a good night sleep?

I did not know Mouse, however it’s been good to meet some of his friends and his brother.The anniversary of his death one year ago yesterday  passed quietly, probable fitting for someone known as ‘Mouse’.
While the anniversary of his death may have slipped by unnoticed, Mouse the man was loved and seen by God, who knows when a sparrow falls.To those who knew him as you remember his passing may the hope of the resurrection become real.

seeing and being seen

The day started as normal.
Negotiating traffic, desperate for the first cup of coffee for the day!!

I took the usual route to the city, which includes Smith Street in Collingwood.
The usual crowd of commuters, people cuing at their favourite cafes.

As I rode I noticed a familiar face, and she noticed me we smiled and waved to each other as I passed.
It made my day!!

So why was that I hear you ask? well let me tell you.

This person has not had an easy life and has not always been respected and treated well.
Know to me through a community of faith in the area, the last time I saw her she sat next to me and held my and and hugged me.

This was so moving as men had not always treated her well, and were not trusted by her.
This fact was not lost on me, in fact it was one of the most moving experiences I had encountered.

While the smile and wave have been fleeting, it was another reminder that we need each other.

Later in the day as I was loitering around the city, down the various lane ways, which if they could talk would have stories to tell, I heard a voice call out my name.

This was a bloke i had only met recently on the streets one night, where we chatted. I was greeted with a big hug, we chatted briefly and went our ways, planning to meet up later in the week.

Community, looks different for many people, often transient, messy and not always safe.

Today I saw again community at work, as we saw and were seen.